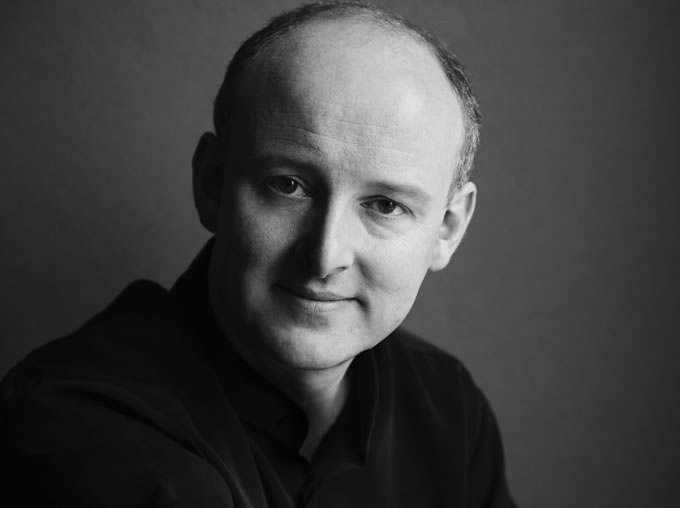 His musical integrity and pianistic command fuel a career that takes him seamlessly from concerto and recital soloist – to chamber musician, song accompanist and pianist director. Initiatives, such as his  Schubertreise series at London`s South Bank Centre, his extensive Beethoven Project or the recording company Woodhouse Editions, provide a platform for his wide-ranging musical sympathies.

Following study with Jean Murphy, Phyllis Sellick and John Barstow, James Lisney made his Wigmore Hall debut in 1986, the Times noting that

Lisney impressed with his clarity of sound and his ability to elucidate the shape of the music and to stand back a little from it as if in modest deference. Exquisitely controlled performances.

After further recognition from the Young Concert Artists Trust in London, James Lisney commenced a career that has taken him throughout Europe and the Americas, performing in many of the world`s most important venues. His recordings – of music ranging from Schubert, Beethoven, Beethoven and Tchaikovsky to Beach, Bjornsson and Scharwenka – have gained recognition form colleagues and plaudits from the recording industry.

Lisney clearly has technique to spare, commendable unanimity of co-ordination, an enviable range of articulation and ultilises a wide, though never exaggerated dynamic range. He also has the uncanny ability of hitting on just the right tempo and conjuring up the appropriate mood  CD review

James Lisney`s repertoire ranges from baroque masterpieces to music of the present day. In the past decade, the music of Schubert has been a central pre-occupation (in performance and in recordings) and he regularly presents cycles of the piano sonatas and miscellaneous works.

The English pianist James Lisney, a guest of the Bucharest Filharmonic, offered a Schubert programme. If we were able to rediscover Schubert`s music in all its diversity and nuances it is to the credit of the pianist, who proved to be an extraordinarily sensitive interpreter of this music. With a technique perfectly adapted to the Schubertian style and a remarkable varied sound, springing from a unique sensitivity, James Lisney succeeded in holding the attention of the audience throughout, not allowing a moments escape into other thoughts, attracting them with permanent internal movement and intense artistic feelings. A truly original musical personality. Actualitatea Muzicala, Bucharest

Following the success of his performances and recordings of Beethoven`s complete duos with strings (with Alexander Baillie and Paul Barritt), James has now started to record the solo sonatas.

Contemporaries said of Furtwängler that his performances were acts of re-creation – works reborn in fire. Lisney, likewise, made of these sonatas a phoenix, boundlessly expressing a glorious rebirth of Beethoven’s creativity, re-animating the very phrases of his musical processes in all their enchanting, mercurial, forceful, kaleidoscopic variety – brusque and blunt, longing and tender, ineffable and sublime. One felt that all emotions human-beings had ever felt were incomparably here – and, further, some that had been felt only by this extraordinary man and, maybe, just a few others.
Lisney gave us a journey of the soul. The Classical Source

In addition to the mainstream repertoire, Lisney has made a special study of the music of Enesco and has a special relationship with the Dutch composer, Jan Vriend.

Chief amongst Lisney`s pianistic idols is Claudio Arrau – it is, however, the inspiration of the concert philosophy of Sviatoslav Richter that has shaped his belief in the presentation of piano, chamber music and song in intimate settings and in non-standard formats. `Small is beautiful` is undoubtedly the way forward for Lisney: a re-balancing of the artistic equation so that classical music is experienced within communities, with audiences who feel that they are an integral part of the occasion and where the impact of great music is not diluted by over formality or too large performance spaces.